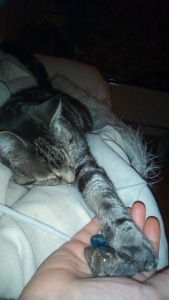 So there I was, standing in the torrential rain with Helen from the cattery where I volunteer as an animal healer. We were doing a transfer of cats from my car to hers, and she was bringing them to see the vet. “Go in out of the rain!” says Helen. “No, I have to go looking for Harry Three Paws,” I said. “Will he not come when you call him?” “You must be joking,” I said incredulously. “Do you have to do this every day?” “Yep. Every day.” Helen shook her head. “And I thought I was bad, out calling my crowd and the neighbours thinking I’m mad. I’m only in the ha’penny place.” Too true, I thought, as I trudged up to Mona’s door. “He’s here! He’s having a nap on the bed. I will bring him down to you, Marese.” “Thanks Mona,” I said, as she carried Harry down the stairs as if he was the most precious jewel in a furry crown. I tucked him under my raincoat to keep his sleepy face dry. The next day I was lucky – it wasn’t raining. I brought my stool and placed it at the base of the wall between Mona and Niall’s house. I peeped over the wall and saw His Lordship sunning himself. He’s a clever boy. The wall absorbs the heat and he soaks it up, giving him a bit of passive physio for his spine and hips which are under pressure because of the uneven distribution of weight. I uncapped the bottle of valerian and placed it on the wall. I crouched down on the stool and thought, I really am getting too old for this malarkey. A tabby face peered over the wall at me and I immediately sprang up and grabbed him. In order to lift him down, I had to kneel on the dustbin. I lifted him onto one shoulder and gingerly stepped down. Off home, carrying cat, valerian and stool. In fairness though, he purred loudly in my ear as though he enjoys the game of Catch Me If You Can, and a cat’s purr in my ear always makes me smile. When I wrote The Tale of Harry Three Paws, I didn’t really envisage that I would still have to do this routine as he got older – and yet, here I am. As the two of us grow older together I suppose he is keeping me supple! The central message of the book is that animals have emotions too and need our kindness. I would appreciate if you would share the link about Harry’s book on your social media please. Amazon UK   Amazon USA Thank you very much indeed. 🙂