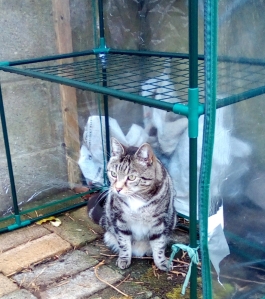 In my continuing odyssey to reduce my impact on the planet, yesterday I bought a greenhouse. The only one I could afford was a one with a plastic cover, but I am hoping that I will grow so much veg that it will offset the detrimental effect of using plastic. It was discounted at the local Woodies DIY store as it had been a display model. A store employee dismantled it and even found the instruction booklet inside. Miracle! Now I am usually fairly organised but somehow or another, by the time I got the bones of the greenhouse into my back garden I had managed to lose the instruction booklet and a couple of the connectors. In situations like these I often talk to my Dad. He passed away nine years ago but he had a great engineering head on him. So I started experimenting with putting it together and eventually succeeded (thanks Dad!). I was very proud of myself because I only had three pieces left over! I took a fit of laughing when I saw them, and concluded that they couldn’t have been that vital. Now I grew up in County Kildare and for some reason there was a local saying that when something was crooked it was “on the Kildare side.” The greenhouse is definitely on the Kildare side! However, what it lacks in architectural aesthetic it makes up with creative use of duct tape. Today I sowed seeds of carrots, chard, tomatoes, courgettes and cucumbers. I also sowed flowers that are bee friendly. As always, the cats were delighted with me working in the garden and supervised my work closely to make sure I was doing it right. Harry Three Paws investigated the greenhouse and gave it the paws up. A peaceful afternoon all told.