First of all, I wanted to share this lovely photo of my breakfast fruit with you. The colours alone cheer me up and make me feel very abundant!

Anyway, last year, I got an email from my bin company saying that they could no longer recycle plastic wrapping. I put it in a separate bag which would then go into the landfill bin. Because it was in a separate bag, I was able to see the amount of unnecessary plastic covers and I was horrified. By the way, following on from my last blog, “Going Bananas,” I did a gleeful jump in Lidl on Sunday when I saw organic, Fairtrade bananas held together by sticky tape – not a plastic bag, way hay!! 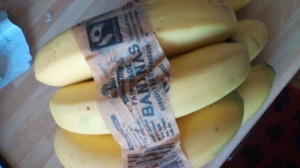 In a continuing effort to reduce the amount of plastic, I decided to try baking some biscuits and bread farls. I usually buy vegan chocolate rice cakes (the chocolate is the only thing that makes them edible. As my Dad used to say, you might as well be eating cardboard.) There are only 6 in a pack. I wish that at least, they would put 20 in a pack and charge more for using less plastic. Or use greaseproof paper. Or something, anything that is not plastic. But while I am waiting for the world to change, I baked some things – with varying results. First for the success. The cookies with coconut, sunflower seeds and cacao nibs came out well. That was the good news. The bad news was that they smelled so nice I ate five of them in one go. Not so good for the waist line. But better for the Waste Line, ha ha! The oat cereal bars turned out okay but with a  venerable 30 year old cooker, they came out a bit burnt. I made notes for the next batch: put on middle shelf and turn down temp a bit. I chewed my way through them over the course of a week, burnt or not. (Where I grew up, you didn’t waste food!) Now the farls were a different story. I thought I followed the recipe but clearly something went radically wrong somewhere. They came out like bullets. Some of you might remember the Charles Bronson films where he put coins in a sock to whack the baddies. Well, he could have done more damage using my farls. I considered giving them to the birds but I decided that I couldn’t have the death of a bird on my conscience so I threw them in the landfill bin. I hope they will biodegrade. Eventually. I’m in experimenting mode and will keep you posted. In the meantime, I cheer myself up by thinking about what MeatLoaf said….Two out of three ain’t bad. 🙂