Felicity was sitting in the hallway yesterday when Bear whizzed past her, following me in the hope of more food. Like many rescue animals, he is always anxious about food. It’s completely understandable, given his background of being abandoned. Some of you may know that he had his leg amputated two weeks ago, and he was really brave last Friday and got his stitches out without sedation. Denis the vet only lost a little skin, as did I, and it will grow back. So here is the current tabby count: Tilly, tabby, four legs. Bear, tabby, three legs. Harry, tabby, three legs. Three cats with ten paws between them. (Older readers may be reminded of “As I was on my way to St. Ives, I met a man with seven wives…!) 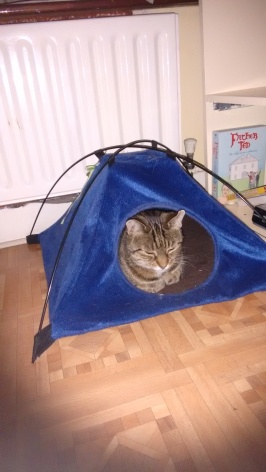 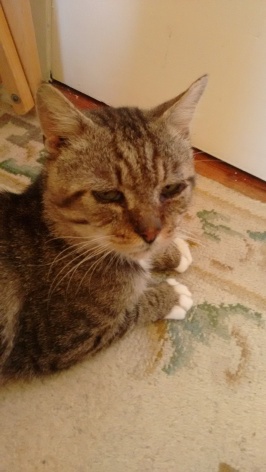 I have to say that the look on Felicity’s face was one of utter confusion. You could see the thought bubble over her head…”But Harry was outside a minute ago. How did he suddenly get up here?” It doesn’t help that both Harry and Bear had the same hind leg amputated. Felicity decided that the only thing to do was go for a long snooze to recover from the tabby extravaganza, and hope that things might be clearer when she woke up.