I was always a bookworm, and when I was young I would read anything I could get my hands on. Once I read a book about the Boer War, when I was about nine. I loved the sound of a certain phrase in the book, although I didn’t know what it meant or how to pronounce it. So when we got our first sheep on the farm, I was giving them names and I called the black sheep Kaga Drill. My family already thought I was nuts but this confirmed it. Of course, the phrase from the book was khaki drill, the material used for the soldier’s uniforms. Good old Kaga Drill lived for many years and had many lambs. I relish the strange names that people and children give animals. 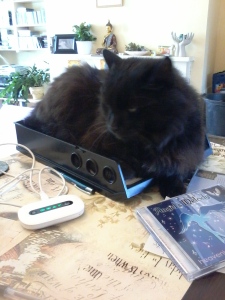 Once I looked after a chihuahua called Lassie. And obviously it is a global phenomenon, as I realised yesterday when I met a Brazilian neighbour who told me that he missed his dog, a Rottweiler called Shakira. I said she must be very beautiful and he said she was. Another Brazilian neighbour had a cat called Fejoada, or Beans. The full name of one of my cats is Sidney Divilskin (pictured in the In Tray!) And of course, my first cat as an adult was called Gannet. Go figure. Obviously the madness in the head has no borders, which is a comforting thought!