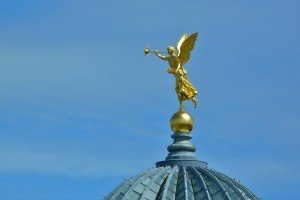 Today was the day my ancient Nissan Micra offered its clutch to the great God of defunct cars. There had been signs but I was hoping to get a few more days out of it. It was not to be. I went around a corner through a set of traffic lights and that was it. No gears to be had. I prayed to the angels for help. What I had in mind was being able to find any gear other than reverse and get it home, ten minutes away. It was not to be. However, two hefty young Gardai out of the Traffic Corps appeared within three minutes (thanks angels and Gardai) and pushed it off the road. Shortly after, two women helped me reposition it. A man stopped in traffic, pulled in and got out to see if he could help. The breakdown assist man appeared within twenty minutes (thanks angels). I went into the nearby shopping centre to find out about buses and went into a shop. The manager offered to loan me twenty euros to get a taxi home – and “I could drop it in to him the next time I was around.” I kid you not. When I got home, two sets of neighbours help me round up the cats as I always try to have them in before dark but I was late home of course. I got three in and then one escaped. Amazingly, I got her back in nearly immediately (thanks angels) as by this time I was pretty exhausted. A day like today reminds me of all the things I appreciate about the friendliness of Irish people as well as my neighbours from other countries. And of course, the angels. Thank you all. I feel blessed. 🙂