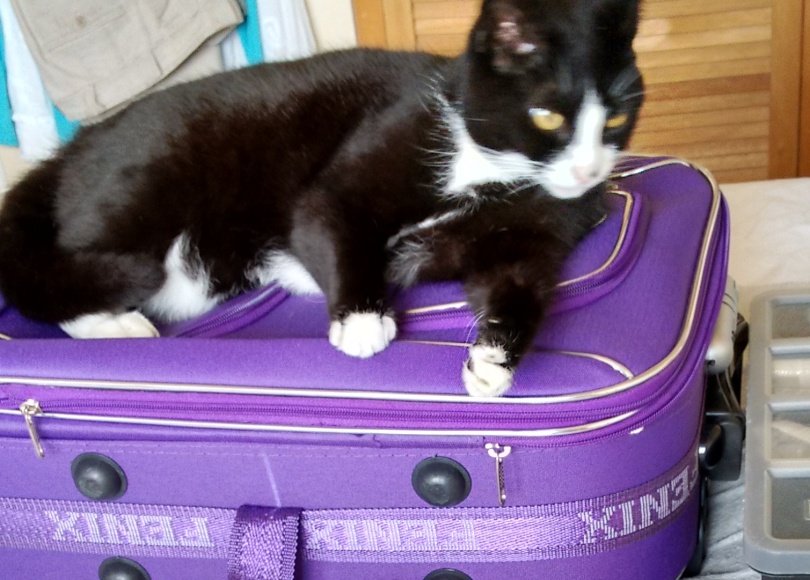 It was two days before Christmas and Libby was glum. She looked at a statue of an angel holding a cat that Jim had once given her. He had said the cat was like her beloved Mr. Pickles. They were both gone now. ‘Serafina,’ she said severely, addressing the angel. ‘Maybe you’ve had your head up in the clouds, eating Philadelphia cream cheese like that angel on the telly. But I need to be cheered up. So get onto it now, right?’

A flyer for a Bring and Buy sale in the local community hall fluttered onto the mat inside the front door. Libby read it and nodded decisively. She put on her coat, and jammed on a Santy hat at a jaunty angle.  She walked to Dina’s house. ‘Get your coat, Dina. We’re going to help out at this thing’, she said, waving the flyer. ‘Dispensing with the social niceties now that we’re old and bonkers, are we?’  sniffed Dina. ‘That’s it,’ said Libby. ‘Here’s your Santy hat. Let’s go.’

‘We’re here to help,’Libby said to the organiser who had a namebadge with ‘Jean’ on it. Jean looked at the angle of the hats. ‘Brilliant, Ladies!’ She grinned as she led them to the tea and cake stand. ‘The price list is there. Go for it!’ she said, as she sped off with a book of raffle tickets. ‘Coffee first for the workers,’ said Dina, ‘and a little something to cheer us up!’ She waved a small bottle of brandy at Libby and winked. Libby stared at her and thought of her angel. ‘Okay, but go easy with it, with all the tablets we’re on we could explode!’ ‘At least we’d go out with a bang!’ said Dina as they clinked mugs and giggled. The crowds started coming in and were unaccountably drawn to the festive atmosphere at the tea stall.

Jean beamed at them as they handed over the biscuit tin full of money at the end of the day. ‘Thanks a million girls, and here, write your phone numbers down, there’s a couple of free raffle tickets for each of you for helping out!’

Libby straightened Dina’s Santy hat and steered her home while Dina sang ‘Dirty Auld Town’ quite loudly. Her own house was warm and she dozed by the fire after her tea. The doorbell rang, but by the time Libby opened it, there was no-one there. Except a cardboard box on the step. Inside was a small shivering ginger kitten. ‘Oh no,’ said Libby. ‘No, no. I can’t afford you. No way.’ But she wrapped him up in a warm towel on her knee anyway. ‘You’re going  to the shelter first thing tomorrow, right?’ But she brought him to the bedroom with her and put him in his box on the mat. She woke on Christmas Eve with a purring ball of fur at her throat, under the bedclothes. Mr. Pickles was the only cat she had ever known to do that. She sighed as she put him in the old cat carrier in the front hall. The answering machine blinked with one message and she pushed the button on it as she opened her post.  It was Jean, the Bring and Buy woman. ‘I’m delighted to tell you that you’ve won first prize in the raffle, five hundred euro! That should make for a cheerful Christmas!’ Libby thought of Serafina and laughed out loud. She took the kitten out of the carrier and kissed him. ‘You may or may not be the reincarnation of Mr. Pickles but the universe is conspiring to keep you here. Welcome home. I now christen you Angelo.’ Libby threw his cardboard box in the recycling bin. Then she opened the bin again and looked in. Yes, it was. A Philadelphia cheese box.